The making of Halloween 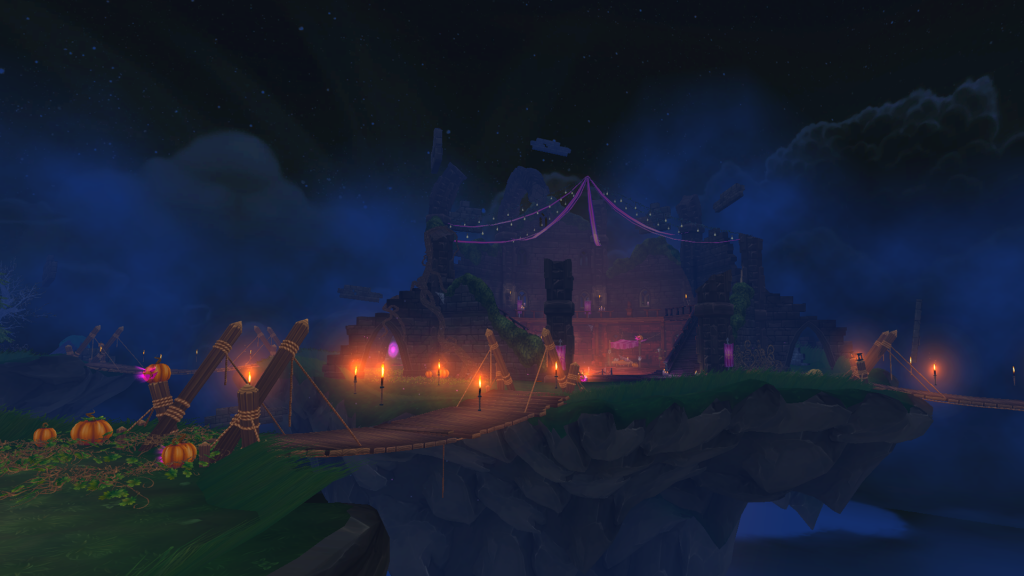 It’s the spookiest time of the year, and Star Stable Online joins the fun with an event filled with chilling activities.

Halloween is usually an exciting time in Star Stable, and this year, the goals were to deliver the beloved tradition with a spectacular twist that would make it feel fresh.

While a few different ideas to theme the event around were discussed – such as werewolf horses, steam punk keep with Big Bonny and Jorvik Ghost Busters – we ultimately decided on the one suggested by our creative director, an Ydris takeover!

Ydris with his penchant for showing up and causing mischief felt like a concrete theme to build the event around. Since the circus of dreams had a very established art direction, our 3D artist Evelina was able to combine it with the aesthetics of Galloper’s Keep to turn it in the direction of a carnival of nightmares. Artists Josefine and Matilda supported this with sets for the player and horse that played into the carnival feel, and a collection of masks reminiscent of the Venitian carnival.

With the (secret!) background story of Galloper’s Keep in mind, this ultimately developed into a storyline with Ydris getting in way over his head, with his attempts to improve upon the world around him leading to the keep being swarmed with lost souls.

Tying in to this, we wanted to get one big and spectacular event that the players could keep returning to throughout the Halloween weeks.

When we started development for Halloween, The Red String trail ride had just returned to Jorvik and was proving popular among the players even as a re-run. But we weren’t satisfied with re-runs alone. For the longest time, we had wanted to add a new trail ride to the game, and this proved to be a good opportunity.

The idea of a trail ride emphasizes that each ride through the trail would let the players experience different things, alone, or together with friends.
The trail ride would give players a replayable experience they could keep coming back to, and it’d work well to give players something to do while waiting for other time-based activities to start, such as the pumpkin hunt from last year, or the new soul shard chase.

Additionally, it presented an opportunity to use a part of our world that, while beautiful, didn’t give players a good reason to revisit it.
Last year, our story quest team had created a new area in Golden Hills Valley that was used to great success for the Light Ride quest, but not used in any other gameplay since then. The autumn style of Golden Hills Valley contributed to making it the perfect location for a seasonal trail ride we could fill to the brim with spooky events.

The Soul Shard Chase came about after our Creative Director asked us if we could do anything more to work the rest of Jorvik into the event.

Since we had already had most of our dedicated time tied up into the Trail Ride and Ydris-ing up the keep, we had to find something that we could create within a relatively small scope, but still felt like a part of the Halloween theme on a whole.

By reusing parts of certain elements that had been in the game previously, picking out material from the gold rush and rainbow chase events and combining them in a new way, we were able to create the soul shard chase as a new event within the timeframe, without needing to cut much from the quest or trail ride.

As when creating every magical horse for SSO, the first phase consists of sketching out ideas, drawing inspiration from nature, popular culture, and requests both from the players as well as from within the studio. This allows us to quickly explore many different themes such as dragons, murky lakes, the aforementioned werewolves, and other creepy things you may encounter around Halloween. Wanting to present a spooky horse that could effortlessly blend in and boogie with the rest of the ghosts at Ydris’ party, but also work as a Jorvik creature with its own backstory, we eventually settled for the pale, ghost-like skeleton horse we now know as Tombhoof!

Creating the non-magical variation to match is always a blast, because it allows us to get creative with combinations of rarer horse colours and markings. This time using a dark base, and allowing the brindle stripes and split bald face to echo the underlying skeleton structure of Tombhoof.

Check out the blog post about the production of the Marwari in Star Stable Online!