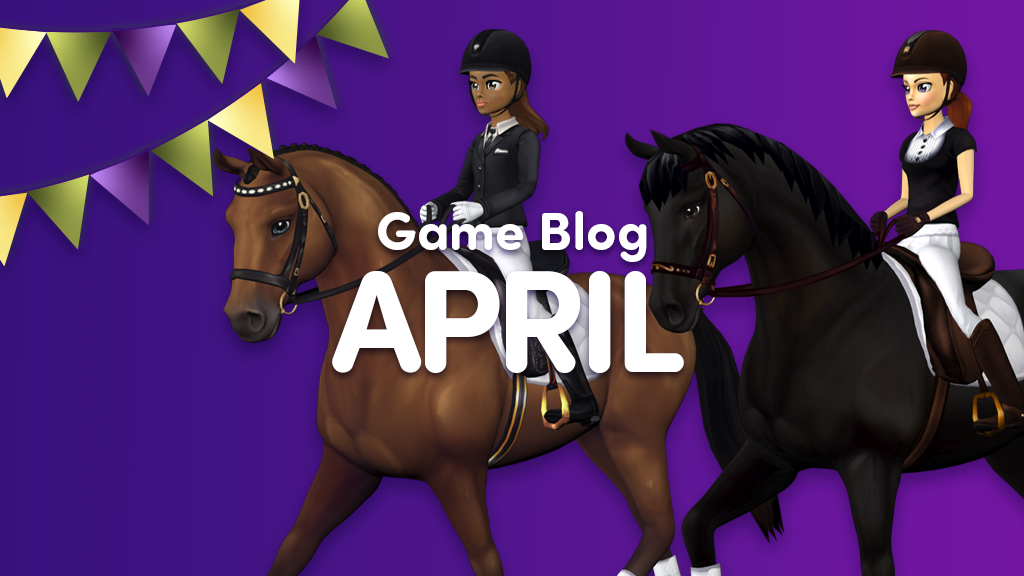 April is a great month! We’re back with our biggest blog post yet! First off is our great Lead Game Designer Bretton Hamilton taking us behind the scenes of the Equestrian Festival. You may remember their amazing post from last month, all about the future of festivals. The reading doesn’t stop, our Tech Lead Ismael Serrano is back to talk more about the important work being done with the server. Followed by our inspiring Game Director Stacy Place, to talk about horse removals. Finally, our incredible producer Marie-Cécile Jacq keeps the streak going with another Player Character Update!

This is Bretton (they/them), the Lead Game Designer for SSO. Today, I want to pull back the curtain on how we work on festivals — specifically, how we made our new Equestrian Festival this year!

Halloween and Winter have grown over the years to become massive holidays, so we had a colossal task to create a brand new Primary Festival in Spring. With all the magic the colder seasons bring, we wanted something more grounded in equestrian culture.

Our first step for most of our projects is something we call Discovery! You can think of this as the “ideas” phase of development.

First, we gathered voices from around our studio to brainstorm and collect ideas: artists, animators, storytellers, programmers, designers, equestrians, social media experts, and long-time players! We came up with about a thousand ideas for what we would like to see in an actual equestrian festival, mindful of how Jorvegians would like to celebrate their love of horses. We also knew we wanted to tell a big story featuring the Soul Riders during the Festival. One major surprise to come out of Discovery is that the animators, artists, and writers told us we were ready to use the Dark Rider Sabine for the event.

After narrowing down our ideas based on our team’s capacity and the project timeline, we present these ideas to our Brand Ambassadors: an elite group of players that we collaborate with directly here at Star Stable! They are our sanity check: If we love an idea they don’t like, we often reconsider that idea.

With the confidence and support of our team, equestrian experts at the studio, and our player ambassadors, we set about building the Equestrian Festival.

We incorporated and updated gameplay from the Open House event at Jorvik Stables from past years. The Open House event will be a permanent addition to the Equestrian Festival to celebrate the baroque dressage style of riding that the area is known for. Additionally, we wanted to incorporate our Red String Trail, Championships, and Riding Clubs (Bobcats, Bulldogz, Flying Foxes, and a new, dangerous Riding Club we’re teasing at if you look closely during the event). This covers a few important aspects of equestrian culture, but this is only the beginning!

We wanted to frontload most of our activities and rewards relatively early in the festival, so to keep the final weeks of the event exciting and meaningful, we decided to schedule our story quests with the Soul Riders and Sabine towards the end.

The team worked REALLY hard to make sure Sabine got an introduction worthy of her importance in the upcoming quests and the future of Jorvik! I’ll pass the mic to Pablo, the designer responsible for the introduction cutscene!

“The idea of presenting Sabine with such a cutscene was on the back of my mind for a few months now. Our cutscene tools are quite difficult to work with, but we want to push for a more cinematic style in our stories.

Sabine turned out to be the character with most cameras attached to her. We usually add a couple of cameras to each. In this case, Sabine ended up using 8 cameras for the cutscenes and dialogues. The cutscene was one of the first things we did for the quest. People at the office loved it, and it got so much traction that I was stunned. It even ended up being used for promotional material!”

Sabine will of course make a proper appearance in the Main Story Quests, but her plans for the Equestrian Festival will evolve next year. Any players who can’t finish the quest in time this year will have access to it next spring. This is just the beginning!

While we’re developing, we find and fix bugs until we reach a point where all the work is ready. Then we spend several weeks polishing and refining our work. We work very closely with our Quality Assurance teams to catch everything, but every game developer can tell you that it is almost impossible to catch every possible bug. Especially for a game as vast and complex as Star Stable!

One of the best bugs we saw during the Equestrian Festival was when a swarm of aggressive balloons would swarm our testers during the story quest at Open House. As they collided with the player, the horse couldn’t calculate what it was standing on, and the balloons would launch the player miles into the air! It’s good we fixed that!

We actually think it’s fun when a SUPER weird bug slips past us and gets discovered by players. It’s like solving a crime scene mystery every time we have to figure out HOW you all keep breaking the game in such hilarious and strange ways.

Our final step is to upload the new version and celebrate another Wednesday release — our 547th to be exact!

Over the coming years, we want to showcase different riding styles and equestrian cultures. What do you want to see spotlighted for next year? Should Starshine Ranch celebrate their western-style riding? What if Hugh ran a rehabilitation event at his Rescue Ranch on South Hoof? Please tell us what and who you want to see at the event next year — we want this festival to grow and grow for years!

I’m glad to be back to explain a little bit more about the work we are doing to the SSO Game Server, to improve the performance and the experience for you! I’m going to focus on the first part that was mentioned during February’s blog, Server Architecture.

First, let’s talk about the problem we are solving here. The server is old, really old, like 10 years old! It was built in a very naive way, and through the years it has become a big monolithic piece of software that is hard to manage and debug. For example, most of the network messages were processed in serial (processed one by one instead of parallelized). This means that the architecture per se was a bottleneck and that it was not easy to fix by simply refactoring it (“Refactoring” is the process of restructuring existing computer code).

That is why we decided to rebuild the architecture from scratch and make a full rewrite of the server. So today, we are creating a modularized architecture (we call them routers) that allows us to grow, improve and add features on the server-side more easily. These modules also process the network messages in parallel (more than one at a time), decreasing the latency for you!

The routers use a central system called dispatcher to register the network messages they are interested in. Once the dispatcher receives a message from the client, it sends it to the interested routers, then the router processes the data in parallel, so it doesn’t block any other network request from the clients, and sends back the answers to the required clients.

Some good news: This new architecture is already up and running in production! This means that some of the old architecture has already been migrated. And of course, we will continue migrating the ancient architecture during the following months.

I hope that you liked it! See you soon in the next The Great Server Refactor chapter!

Although we discussed retiring older horses from the game for a long time, we weren’t always ready to say goodbye. Nostalgia is tough to shake, but confidence in our direction and excitement for our opportunities made the decision much easier!

In October 2018, we retired the first set of horses from Jorvik – the original Fjord horses. We knew retirement was the right direction for the game, but it was difficult to see them go! After that, the next steps weren’t so clear – how often did we need to retire horses to maintain the game’s stability? Which breed should be next?

In early 2020, we conquered the painstaking task of converting our horses from a file format unique to our engine to another more standard as our tools had greatly improved. This opened up many opportunities for us, however, due to the size of this project, we decided only to convert the Generation 3 horses. Ultimately, this meant that we could no longer support our older Generations with bug fixes and new tack additions. The retirement process then became more apparent.

As one of the most demanding elements of the game, horses take up a lot of physical and technical space. Indeed, even though they are adorable, our oldest buddies no longer meet our art standard, are no longer supported from a technical standpoint, can’t wear any new tack, and take up many resources in the game. So, finally, the decision was entirely clear, and the retirement process began with our Generation 1.5 Appaloosas and Akhal-Tekes.

So, will you get to keep the horses you already own? Will they also someday be removed from the game? There are no plans to touch the horses that players already own. As the game grows and evolves, that may need to change someday and we’ll work out a process then, but we don’t see that day coming now. We’ll continue the retirement process with a mixture of all the Generation 1, 1.5, and 2 horses. This will happen gradually over time, and we will continue to let players know in advance which horses will be leaving next!

This month we’re thrilled to show you a sneak peek of our progress on skin colors and eye makeup. Please bear in mind: we’re still working on these, so the pictures we’re showing here aren’t the final render.

For technical reasons, we will start with releasing a range of twelve skin tone options.   We really want to make sure each of them looks good, whatever the lighting in the environment is (night or day). For that, our great graphics programmer worked on a way to change how the skin looks depending on the time of the day, providing the artist with a whole new way to improve character skin render.

We’re very excited to show you this picture (showing a work in progress render), as it is the first time we’re releasing an in-game picture!

Celebrating the diversity also means offering a variety of eye shapes and eyelid types. But like in real life, depending on your eye shape, using make-up will produce a very different result. We’re still experimenting to find the best way to offer exciting make-up for every eye and eyelid type.

In the following picture you can see the work of our amazing 3D artist, where she’s testing the same make-up texture on different faces. We will have to try several solutions and choose the best one that will allow any player who wants to wear make-up to look amazing with it.

Wonderful writing! Hope you enjoyed this month’s edition of the blog! Hope you’re enjoying the Equestrian Festival. Remember, this year’s Festival comes to an end on the 3rd of May, so there is still some time left to experience all the festivities!