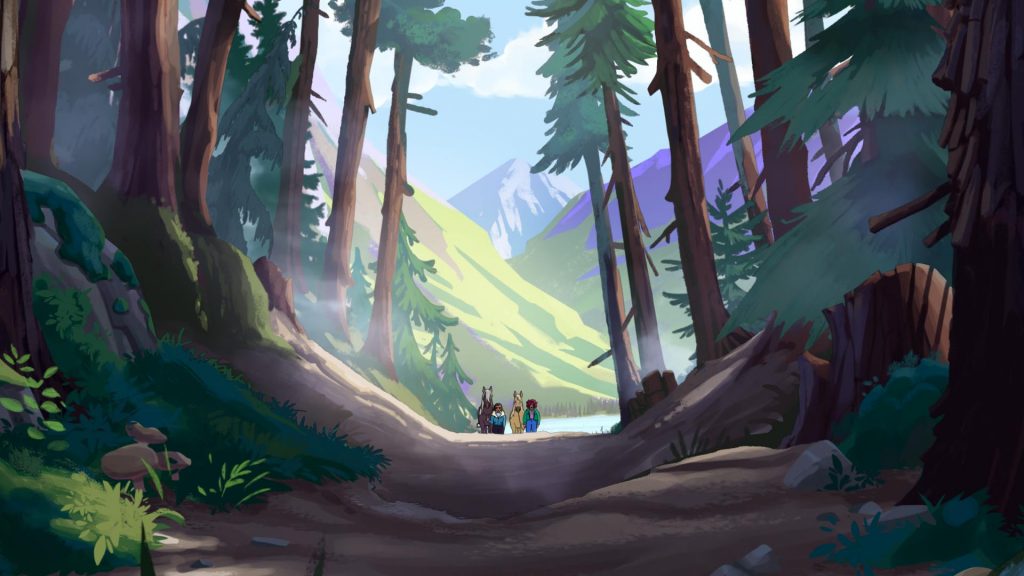 Creating an animated series within the Star Stable universe has always seemed like a no-brainer. The idea has been top-of-mind and frequently requested by both fans and from within the company. We see the world of Star Stable and the island of Jorvik as an endless source of stories, and an animated series was a golden opportunity for us to expand our universe with more adventures, characters, and settings. So in the spring of 2019, we finally made the decision to kick off the development of a short-form animated series.

The Story of Star Stable: Mistfall

Star Stable: Mistfall is the story of a tragic accident, a lost girl, a mysterious horse, a fateful friendship, and a magical island.

The main character of the story is Skye, a teenage girl who has been sent to Jorvik by her mother after a sudden fire in their New York apartment.

Skye knows she didn’t set the fire. But no one else, not even her mother, seems to believe her. Which is why she’s been sent to spend the summer on a remote island in the middle of the North Atlantic.

When arriving in Mistfall, Skye feels wrongly accused, lonely, and out of place. Luckily, she’s welcomed by Rania, a long-lost childhood friend that Skye no longer remembers. They quickly hit it off and develop a strong friendship.

During Skye’s stay in Mistfall, she volunteers at the Mistfall Ranger’s station for the summer where she’ll work with the horses – a dream come true for many 16-year-olds, but not for a girl who’s spent her entire life in urban Washington Heights, where the closest thing to a horse was the mechanical pony ride outside the grocery store.

As the story progresses, Skye realizes that the true nature of Mistfall is a secret that few people know. It is a place of magic, mystery, and for Skye, intrigue, danger, and adventure.

When creating the story of Star Stable: Mistfall, we knew that we wanted to tell the story from the perspective of a total newcomer to Jorvik and a complete horse rookie. Through her eyes, the viewers get to know the island little by little, and follow Skye as she discovers her love for not only the beautiful wilderness of Mistfall, but most importantly: the horses.

Bridging the series and the game

The area of Mistfall, the Jorvik Rangers, and the characters of Sigry and Rania, are all very meaningful and dear to players of the Star Stable Online game.

Thus it was important to us that the Mistfall of the series was recognizable to players who had visited the Mistfall area of the game.

In order to bridge the two worlds, a good amount of time was spent investigating the true essence of the Mistfall area. We asked ourselves: what are its most distinctive features? What elements of the area simply had to be incorporated into the series? What elements could be developed and evolved to better fit the series?

Of course, the lush and dark green forests are Mistfall’s primary visual feature, so the forest environments of the series had to look just right. The extremely talented background artists were committed to finding the right color shade for the mist, the perfect level of wetness of the moss, and the precise height for the pine trees.

To further strengthen the bridge between the Mistfall of the series and game, music and score composer Axel Bellinder incorporated iconic elements from the Star Stable Online Mistfall soundtrack to the series score. These elements, such as the distinctive mouth harp, would signal familiarity to those who visited Mistfall in SSO, and feel like a nod to both dedicated players, as well as to the original creators of Star Stable Online’s Mistfall area.

Here’s what Axel Bellinder had to say about his process:
“It was great to be able to step into the Mistfall series production with a palette of sonics ready at hand. When working on the original Mistfall in-game soundtrack, I remember wanting to find that atmosphere or reverberation you get in a forest with really tall trees. For the series, I actually started with the same mindset and began composing for episode 5 where Skye does her own exploration of the wilds. I believe that section set the musical tone for the whole series. If you listen closely, you might notice that I incorporated that theme back into the extension of SSO Mistfall area – Wildwoods. So, I feel there’s a close bond between the series and the game.”

Producing a series during a difficult time

Star Stable: Mistfall has been developed and produced by several dedicated teams all over the world. And like most projects that were under production in 2020, the global pandemic posed big challenges for our production.

We’ve been lucky that our series is an animation, as many live-action productions were shut down completely. Although animation requires fewer in-person meetings, lockdowns and working from home still caused major roadblocks.

The international teams in Sweden, Canada, US, Finland, and the Philippines have all continued to show dedication and grit, constantly impressing us with their creative solutions and problem-solving that allowed the production of the series to continue despite these difficult circumstances.

We are beyond excited to finally release Star Stable: Mistfall. It is with great pleasure that we get to share the adventures of Skye, Blaze, Rania, and Dellingr with the world.