In her words: Coming together in challenging times 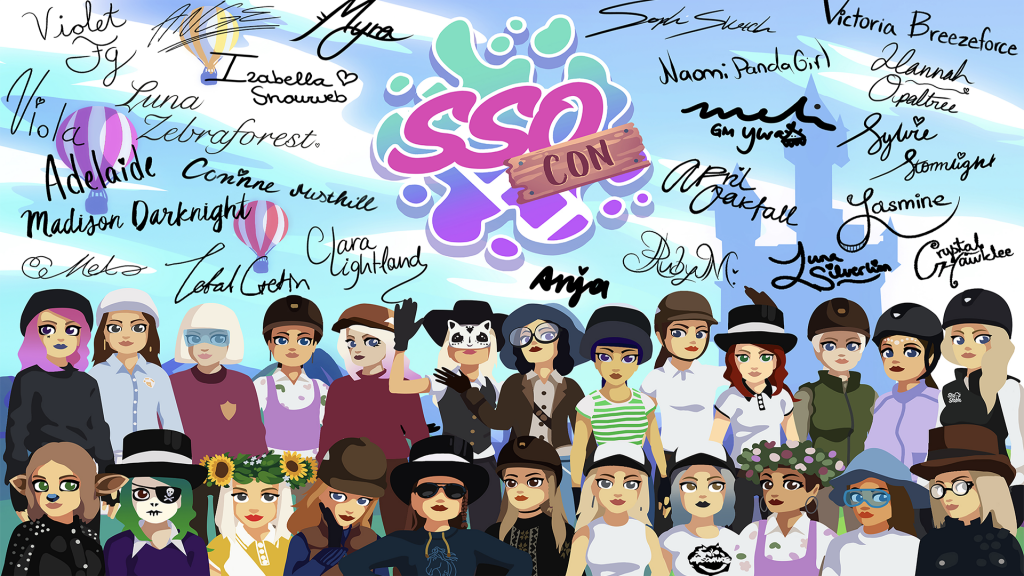 The coronavirus pandemic is affecting people in many different ways, forcing some into social isolation, which in turn is impacting their wellbeing. We’re so happy to see that the Star Stable community can continue to help us check up on each other and share our support.

One wonderful example of this is when our fans and players came together this summer for the community-led SSO Con event. 22 creators organized a two-day online event full of in-game meet-ups, live streams, Q&As, giveaways, and a fundraiser for the Mind organization.

Together these girls raised £1,907 (equal to $2,500!) to support people struggling with mental health issues. We’re proud that our platform can offer a sense of belonging and empower girls to join forces, and we’ll continue to do our part in supporting girls of all ages. We had the opportunity to chat with April and Sylvie, two of the creators behind SSO Con. Read on below, and please remember to reach out if you need a hand!

What were the last few months like for you – what are your experiences of self-isolation and social distancing?

April:
The last few months were really difficult for me in terms of self-isolating and being in lockdown. I am a really social person, and so I struggled to cope with the fact I couldn’t see anyone else other than my family for months on end, and often being left to myself and my own thoughts. Star Stable saved me in this case, I made new friends online, re-established old connections and socialised through the game, whilst continuing to create content for my channels. It was a really nice distraction for me, and a chance to rediscover my roots. Even though it was tough, I used this time to try new things like baking, music creation and writing, and I took some courses in coding and video game creation.

What inspired you to create SSO CON?

Sylvie:
April and I had already been working together to come up with new content, so when she came to me with this idea I was totally on board! She had the basic concept of the event and then I added to it. We both thought that during these uncertain times we would create an event where young people could gather on Star Stable and meet some of their favorite creators. It could be something that they look forward to during a time of crisis, something to keep them busy!

We both were feeling a little trapped so we decided to throw ourselves into this event to help. A lot of events and plans for the summer were cancelled, leaving people disappointed. This was one of the things that really stood out to April and I, so we thought that if we create an online and virtual event it would help brighten the community during such a tough time but also it was free of charge! We made sure to organize the event in non Star Rider places so that anyone could join in.

What kinds of activities took place during SSO CON?

April:
We had a meet-up between Star Stable players and Star Stable creators! This was an opportunity for girls to meet the people behind some of their favourite content around Star Stable. We had all kinds of creators, such as artists and bloggers. This was over a two hour period, and then we moved on to a thrilling Q&A where girls could submit their questions through our website, and we picked some to answer, whilst this was all being live-streamed!

After this we played games in the afternoon which included “Find the Creator” (a bit like a game called Sardines) and we all flooded areas such as Cloud Kingdom and Starshine Ranch, whilst having a wild horse stampede, or doing a championship on foot! I think at one point there was a campfire going on in one of the locations! It was an absolutely epic moment.

You gathered thousands of girls online and in Star Stable Online for this event. How did you notice that there was a need to connect and come together?

Sylvie:
I saw that a lot of my friends were also struggling in the same way I was. I also noticed that more and more players were online and trying to find something to do other than sit at home bored! Many people had lost someone or had been affected by the pandemic so I thought that if we made an event where for a weekend they could log on and enjoy themselves just to forget the outside world, it would make a difference.

The main thing we wanted to do was have SSO CON incorporate a meet-up with the creators and players so that they could chat and interact more. This would help with the feelings of loneliness. This went two ways as it was the first time really that a big group of creators had a server to chat together. There were many late night calls trying to sort streams and helping each other out which really helped bring us all together and bond.

Is there anything you learned during SSO Con that you want to share with girls around the world who are sheltering at home during the pandemic?

April:
I learned that there’s always a bright side, you just have to look past the rain to see the rainbow. And I know that sounds slightly cheesy, but I’ve made some great new friends during lockdown which I wouldn’t have done if that didn’t happen. We are an amazing, loving community, and to be a part of it is something so incredibly special. I felt it was an opportunity to reach out to old friends who we may have lost touch with, and remember exactly why we became friends in the first place, to laugh at their jokes, even if it is from behind a screen. You need to try to be positive, look at lockdown as an opportunity, not an issue, and it will change your entire perspective on things.

What is your favorite memory of SSO CON?

Sylvie:
A very tough question! I loved it when we did a quick rehearsal run before the weekend of the event. It was so lovely to see all the creators online at one time, and we had such laughs. I think my all-time favorite moment was heading to Cloud Kingdom and seeing the trail of horses flying in-between each of the clouds. We even went on the slide backwards and everyone went soaring into the sky!! We were super lucky to have the kingdom open during that weekend.

You chose to do a fundraiser for Mind, an organization focused on better mental health. Together you raised £1907. How did you decide which charity to donate to?

April:
It was a collaborative effort between all of the creators involved in the event. We asked them to put forward charities that meant a lot to them, and then discussed between us all which ones we felt were in line with the message of our event and could be often overlooked when it comes to deciding charities. We then agreed that mental health was an issue that many have suffered from and something that also affected many people during lockdown. We then decided that Mind was a great charity as their resources and help were offered internationally, so it benefited everyone.

Sylvie:
The main thing that stood out to me throughout the whole event, and still to this day, is the community’s creativity. We had some really beautiful fan art from the event, people making videos about their experience, little edits of the livestreams, and more. I was blown away by everyone’s talent, even the creators coming up with some of the designs for the banners and logos. The community continues to surpass any expectations I ever had, and it’s so inspiring to see.

Is there any message you’d like to convey to the SSO community as we continue to live with the pandemic?

April:
You’re not alone. No matter where you come from or who you are, we are all in this together. We are united against this pandemic, and we will always be, as a community. However, you need to make sure you look after yourself, spend time with your family, maybe try something new that you haven’t done before. But we will all get through this together, keep being the loving and creative community that you are, and we will change lives together.

Thank you so much for your time April and Sylvie!
Hugs from The Star Stable team